The Lanterne Rouge (that's the red jersey) is worn by the last person over the finish line of Le Tour de France.  This year, that award went to Lawson Craddock and after you read his story, you won't feel bad for him.  In this instance, coming in last was more of an honor than quitting, and the only thing he and I have in common is that I'm not quitting either.

My lofty goal of combing, dyeing and spinning up 5lbs 8ozs of this Romney that I purchased at the NY Sheep & Wool Festival (aka Rhinebeck) back in 2013 didn't quite pan out: 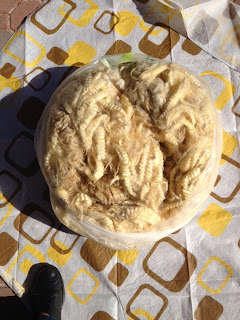 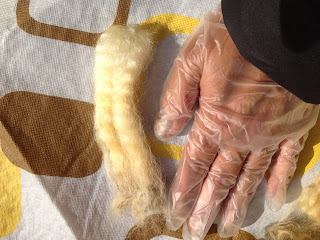 This bag of fiber wasn't the best fiber I ever purchased.  There were lots of second cuts and veg matter.  There was waste after plucking out the locks, there was waste after washing (I highly recommend using lingerie bags).  The fiber had yellowed, some of it unusable which is even more waste.  I'm not sure how much waste there was, surely it had to be close to two pounds!  Even with the reduced amount of fiber, there was still a long way to go.

I dyed up as much as I could in a week, thinking the other two weeks would be carding and spinning, but that didn't quite pan out either, so I had to settle for a dent in that bag of fiber. 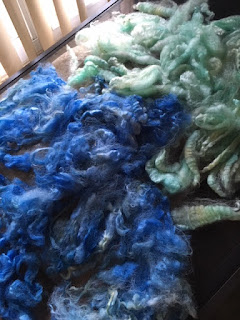 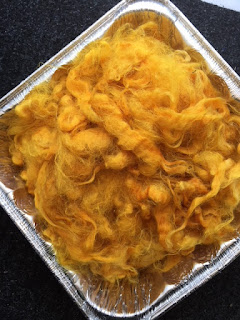 I drum carded what seemed like so much, and it's all so fluffy and pretty, but I have a long way to go before I see the end of this fiber! 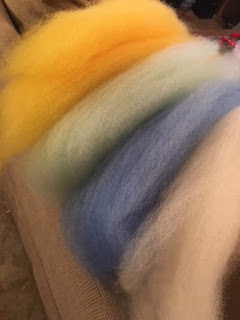 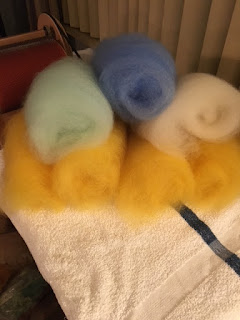 Since the white fiber has a yellow tinge to it, I've decided it will be dyed a pale gray and it could become this sweater, and if I dye some more of it in other colors, I could end up with this one.  I guess it depends on how much fiber I get and what weight I end up with.   Whatever I get from now on is going to be a pleasant surprise.

This is a Flickr badge showing public photos and videos from bronxknitter. Make your own badge here.